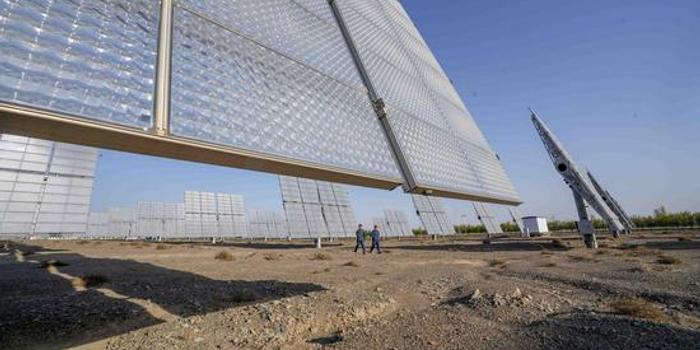 URUMQI, April 28 (Xinhua) -- In the vast Gobi desert in the east of China's Xinjiang Uygur Autonomous Region, over 10,000 pentagon-shaped mirror-like devices form layers of circles, resembling a radiating sun. At the very center of the "sun" stands a 220-meter-high tower.

It is not a mysterious ritual from the old days, nor artwork. The project is a modern attempt by the region to capitalize on its abundant solar energy and turn it into heat and power.

The photothermal power station is the first of its kind in Xinjiang. It can generate power equivalent to that of burning some 60,000 tonnes of standard coal each year, reducing carbon dioxide emissions by over 150,000 tonnes, lending steam to the country's goal to strive for carbon emission peak in 2030 and carbon neutrality in 2060.

With the largest land area among provincial level regions in China, Xinjiang is home to vast expanses of Gobi deserts with limited rainfall but strong wind and sunshine.

The far west Chinese region has been a pioneer in the country's new energy drive by turning its natural endowments into power for a greener future. A mountainous district in its capital city Urumqi is known as the cradle of China's wind power industry.

Xinjiang generated some 84.45 billion kilowatt-hours of clean energy power last year, a record high. About 32 percent of the electricity was transmitted to 20 other Chinese provinces, regions and municipalities, helping cut over 23 million tonnes of carbon dioxide.

Official data showed that China's installed capacity of renewable energy power generation totaled 930 million kilowatts by the end of 2020, accounting for 42.4 percent of the country's total.

Power generated by wind, sun and the like hit 2.2 trillion kilowatt-hours last year, accounting for 29.5 percent of the country's total electricity consumption, up 9.5 percentage points from 2012.

Developing and facilitating clean energy is one important path for China and the rest of the world to go carbon-neutral, said Liu Zhenya, chairman of the Global Energy Interconnection Development and Cooperation Organization.

The Xinjiang-based company has built a pioneering carbon-neutral industrial park in southeastern Beijing. With a smart network of wind and solar energy devices, about half of the park's electricity is powered by clean energy.

Going carbon-neutral is a shared goal and will bring new industrial opportunities, said Lenovo's chairman and CEO Yang Yuanqing, adding that technology and innovation hold the key to achieving the green target.