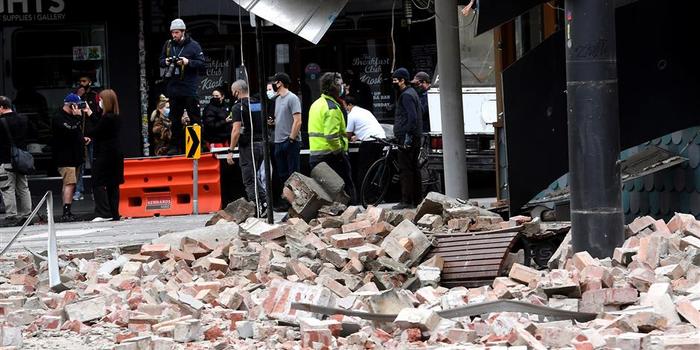 People gather near a damaged building in the upmarket shopping area of Chapel Street in Melbourne yesterday, after a 5.9 magnitude earthquake.

The shallow 5.9 magnitude tremor hit east of the country's second-largest city at the start of the working day and was one of the largest to hit the country in decades.

With Melbourne beginning its eighth week of pandemic lockdown and braced for a third straight day of violent anti-vaccine protests, most residents were at home when the quake struck.

Zume Phim, 33, owner of Melbourne's Oppen cafe, said he rushed onto the street as the tremor hit.

"The whole building was shaking. All the windows, the glass, was shaking – like a wave of shaking," he said. "I have never experienced that before. It was a little bit scary."

In a popular shopping area around Melbourne's Chapel Street, masonry debris tumbled from buildings and littered the roads. Bricks and rubble surrounded a burger restaurant and large sheets of metal hung off the restaurant awning.

Victoria's State Emergency Service said it had received 100 calls for assistance "largely related to minor structural damage to chimneys and facades on buildings."